Jamie Markley, David van Camp, and Scott Robbins focus on the day’s hottest news stories. If your friends are talking about it at the office, then Markley, van Camp & Robbins will be discussing it on the air.

Jamie Markley looks at and breaks down topics in a way that no one else in media does: like the average person. That’s not to say he doesn’t know what he’s talking about; it’s to say he is able to take complex topics and drill down to the heart of every topic. He’s also a walking music encyclopedia, who’s not afraid to drop random facts at a moment’s notice.

David van Camp is a football guy from Texas, a Star Wars nerd, a guitarist, a singer-songwriter, a foodie, and will tell you a real man eats his steak, rare. He’s truly one of a kind. As a former news guy who’s now unleashed, he brings a unique perspective to what’s happening in the world. He sees right through people’s bull and is not afraid to call them out.

Scott Robbins was enjoying great success hosting the Robbins & Markley show in 2015, when back to back heart attacks left him clinging to life for the better part of 6 weeks and in the hospital for 6 months. The doctors didn’t know if he’d make it out of the hospital, let alone ever get behind a microphone again. Many have called him a walking miracle. Scott is best known for his lack of filter and sarcastic humor. He fondly recalls some of his most memorable moments as seeing Michael Jordan naked (true story).  Attending 5 NKOTB concerts with his awesome daughter and the day his daughter chose nursing over radio. Scott is the oldest member of the show. He was born in 1960 and remembers life before cable TV (and running water).

CONNECT WITH THE SHOW 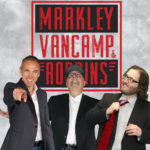